We are the only locally owned and operated paving company in North Idaho. We started with one paver in 2001, and today we have become an industry leader. Long-time resident, Todd Kaufman, created Coeur d’Alene Paving and was joined by his lifelong friend Craig Cozad in 2004. Their vision for success has been the foundation of our continuous growth. Today we have an asphalt plant, a concrete plant, and three gravel pits to serve North Idaho and Eastern Washington. We are also the only licensed distributor of Verti­Block in our region. Our extensive portfolio includes the prestigious Coeur d’Alene Resort, Interstate 90 renovations and thousands of commercial parking lots, and residential driveways.

We believe in investing in our community by supporting various recreational, social, and educational causes. Coeur d’Alene Paving has over 175 employees that are the backbone of our company. Their efforts have helped to create a company committed to quality and service. Todd Kaufman, an enterprising entrepreneur, formed Coeur d’Alene Paving in 2001 after attending an auction where he saw a dump truck and paver for sale. His interest was sparked when his research showed a need for a locally owned and operated paving company in Coeur d’Alene. Todd made many sacrifices to establish Coeur d’Alene Paving, learning how to do much with very little. His tenacious attitude and his keen business acumen are his greatest assets. Todd surrounds himself with good people whose industry experience has contributed to his company’s exponential growth. Todd loves the great outdoors. He has a hobby for every season and enjoys spending time with his family. Craig Cozad joined Coeur d’Alene Paving in 2004 when longtime childhood friend, Todd Kaufman, presented him with an opportunity to come on board as a partner. At the time, he was living and running an excavation business in Alaska. He said yes to the partnership because he longed to return to his Coeur d’Alene roots and could envision making Coeur d’Alene Paving a contender in the local industry. Craig brought a wealth of knowledge and 26 years of experience in excavating, grading, and paving. He is also equipped with the ability to think creatively, and it is this gift that continuously generates new ideas and visions for our growing company. For Craig, everything is centered around the community and the people who live here. He believes in using his locally owned and operated business as a platform to give back and strengthen the community by donating concrete materials to build foundations for homes supporting good causes, paving pathways for easier wheelchair access, seeking out Veterans to hire, and frequenting other local businesses. On the weekends, Craig loves spending quality time with his family, boating, camping, hunting, side-by-siding, and snowmobiling. Phill Weist has been estimating at Coeur d’Alene Paving since 2005. His over thirty years of experience in the field include Project Management with the Idaho Department of Parks and Recreation, Rock Crushing, and Equipment Operating. Phill earned a B.S. Degree in Construction Technology from Eastern Washington University and was honorably discharged from the United States Marine Corp. Reserve. It is a culmination of these skills and years of experience that contribute to his ability to ensure projects exceed expectations. Phill is energetic and enjoys being part of the growth Coeur d’Alene Paving has experienced over the last decade. On the weekends, Phill spends time relaxing on the lake with his family. Danny Williams has been a valuable member of Coeur d’Alene Paving since 2007. He was born in Lewistown, Montana, and spent his entire childhood watching his dad work with heavy equipment. The Coeur d’Alene High School alumni has many hobbies, including jeeping, flying airplanes, and spending time with his four children and wife. Danny is dedicated and hard-working. His ability to wear many hats, navigate challenges and establish relationships in our community all play a part in his success as our Superintendent. His nickname around the office is “Sunshine.”

Jason Peterson has been our Project Manager and has been in charge of Quality Control since 2015. He has over 28 years of experience in the field, emphasizing quality control, testing, inspection, asphalt and concrete design, project management, and crusher control. He is certified in multiple areas, including Nuclear Density, Concrete ACI Levels I and II, WAQTC – Aggregates, asphalt, and basin embankment. Jason is a family man; he loves going home every day to his wife of over 20 years, twin daughters, one dog, two cats, four horses, and two goats. Jason is an honest man who enjoys people and finds joy in building a project and seeing it to completion. He spends his free time with his family, camping, golfing and shooting skeet & trap. 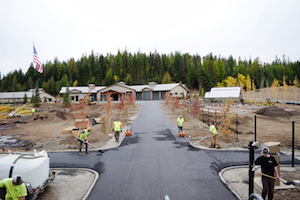 "We've been using this company for years. They are proof that reliable companies still exist." - George & Helen CdA, ID